What can a raccoon and wallaby teach our children about the difference between ‘rich’ and ‘wealthy’?…

In our second instalment in a series from guest blogger, Will Rainey, he discusses how his childhood dreams to become rich turned into a deeper appreciation of what wealthy truly means.

Will began his career as an investment consultant and is the noted author of the children’s book, Grandpa’s Fortune Fables, and founder of bluetreesavings.com which helps thousands of parents talk to their children about money so they grow up to be financially healthy and wealthy.

Here he discusses that instead of being rich, he hopes his children will generate money to cover their expenses and have the security that, should their circumstances change, they won’t be in financial trouble.

I remember as a kid wanting to be RICH! I would draw pictures of the mansions I would live in. I would talk about the supercars I would drive. Maybe I’d get a yacht, but how big?! To get more ideas about my future lifestyle I would watch ‘MTV Cribs’ (a programme which did tours around the luxury houses of famous people). My future life was going to be awesome.

How did I expect to get RICH? I was going to work hard at school, get a great job, earn loads of money and buy all this stuff! EASY!! The above seems like a good definition of RICH and how to get rich. I can imagine other kids now thinking the same as I did then.

What I feel about my childhood dream:

I suppose there are three parts to my childhood dream:

1. Believing it was possible: I was lucky that I had a belief that I could achieve that dream. A big part of accumulating money and managing it well is believing ‘I can’. I thank my parents for always encouraging me to dream big and instilling that confidence in me. There are many other kids that may not have been so lucky and grew up believing they had to settle for less.

2. Need a business, not a job: I now realise that, to earn enough money to buy multiple mansions and a yacht, just getting a routine job and working for someone else is unlikely to achieve that. To earn that kind of money might require owning a business where others help generate revenue. This is something that isn’t taught to most kids. I’m now a strong believer in educating kids that whilst getting a good job can provide a good salary and financial security, there is also an alternative option to create their own business. It might not be a suitable option for all kids, but it should be something for them to at least explore. A link to help you see if your kids have entrepreneurial talent can be found at the end of this blog.

3. Opportunity cost: When I pictured myself with all the big houses and cars I never thought about what I would be giving up as a result of buying all these flashy things. I now know that there are very few people who have all these nice things AND lots of money in the bank (or invested). This means there are people with lots of flashy things but who have lots of debt required to acquire them or, that they are paying a significant amount of the money they earn just to maintain their lifestyle. This means that if their earnings stop, they could potentially lose everything. There are many famous people from that MTV Cribs who have now declared bankruptcy as their fame died out (i.e. their earnings stopped). Essentially, I now realise that these people were RICH but not WEALTHY! Actually, worse than that, some of those people in the show just appeared rich as it turns out they rented houses and cars for the show.

I now fully appreciate that there is a difference between RICH and WEALTHY.

I want my kids to become wealthy

Wealthy means they have money saved. This money generates them money so they can cover a lot of their expenses and have security that if their circumstances change they won’t be in financial trouble. Granted this doesn’t sound as sexy or exciting as getting RICH and buying loads of cool things! The good thing about wanting them to become wealthy is that they get to define what wealthy means to them. There is no expectation that they have to earn a certain amount of money (although I do want them to be able to afford to move out when they are in their 20’s!).

To help teach my kids (5 and 8) this lesson I tell them about two different characters, Rich Raccoon and Wealthy Wallaby (they chose the animals):

Rich Raccoon appeared to have it all:

He had a classic RICH lifestyle!

One day he went for lunch with his friend, Wealthy Wallaby. Rich Raccoon insisted they go to a fancy restaurant and that he would pay for the meal. He always felt a bit sorry for Wealthy Wallaby as she wasn’t as rich as him. He saw that she:

All these things meant Wealthy Wallaby had more money coming in and therefore as she had paid down her debts, she had built up her savings. These savings were now her source of earnings for early retirement. Rich Raccoon started to think about whether he could do the same. Unfortunately, whilst he had lots of nice material things, he still had a large mortgage, lots of credit card debt and, no money saved in the bank. There was no way he could retire for a long time. After lunch, Rich Raccoon decided to make some changes to his lifestyle. He sold his big house and one of his cars. This meant he could pay off a lot of his debt and start building up his wealth. He wanted to become a Wealthy Raccoon!

To be wealthy, you need your own financial forest

As the story above highlights, it’s not the material things you own that make you wealthy, it’s the money you have saved or invested that makes you wealthy.

For my girls, we show them their savings and investments as Bushes and Blue Trees respectively. As they save more, the more bushes and trees they plant and grow. Over time they are witnessing their financial forest grow. This is teaching them how to build their wealth. This is giving them a massive advantage in life as there are so many young adults out there today that don’t have a single bush or tree, let alone a forest!

Getting RICH is about how much money you make (or appear to make). Getting Wealthy is about what you do with your money. Those that are financially secure are those that are Wealthy. Help your kids to realise this and start showing them how to build wealth as soon as possible. Remember, the key to building wealth is having great money habits which are mostly formed by the age of 7. That’s not to say that if your kids are already over 7, you can’t start educating them now! Rich vs Wealthy is a key theme in my new children’s book, Grandpa’s Fortune Fables 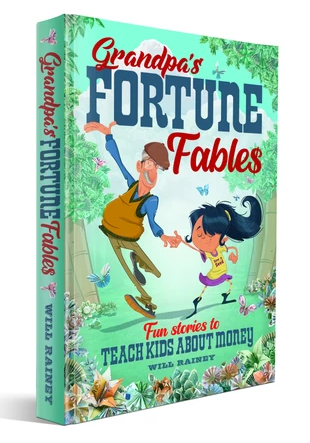 Buy your copy of Will’s new #1 Best Seller, Grandpa’s Fortune Fables. The most fun way for kids to learn about money. Available on Amazon.

What to read next? Train your kids to follow the ‘3 Rules of Wealth‘.

We are a team of financial professionals who specialise in helping families make good decisions in line with their values, dreams, and aspirations.  We have over 20 years of experience in guiding families to understand their relationship with wealth and how it can be structured to make their dreams a reality.   Find out more by contacting us on 0161 5467452 or email theteam@xentum.co.uk 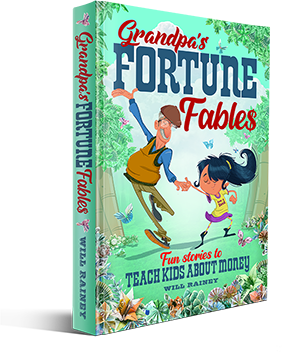